Welcome to George's new obsession. Letter writing. Quite honestly...we are thrilled! George has really been rather uninterested in learning his letters and writing until Sunday. Now don't get me wrong, he loves to read - or rather to be read to. But knowing what those letters mean and how he can put them together himself has been a struggle...until this weekend. Sometimes I amaze myself with my own genius, of course more often then not I amaze myself with my own stupidity, but I have to give myself some credit for this one. I bought a postman kit. It has stationary, postcards, envelopes, fake stamps, and even a postmark stamp. 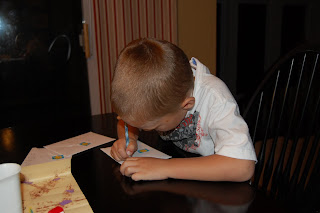 On Sunday George "wrote" five letters and then wrote four more on Monday. I'm making him sound out at least the first letter that things start with and it has actually been the first time he's practiced writing without complaining...mainly because he hasn't figured out that he's practicing writing - he thinks he's playing - sneaky mom! Then we mail the letters. I just have to remember to pull them out of the mailbox and put real stamps and addresses on them. :) Keep a look out in your mailbox!